VOID is a computer input devices designed to help computer creatives make what they desire with ease. After completely primary and secondary research it was clear that there were major issues with current products on the market. From this research the three problem areas were created.

There was a correlation between having the right tool for every job and desk clutter. Many of the tools were so similar but were made only for a particular use and couldn't be customized.

Some of the tools users said had very high value but were tools that were for a specific, and rare, use scenario. Due to the limited use they couldn't justify purchasing it.

A major issue with current products is the associated applications. Most of these applications limit users on what they can set and can create even more frustration.

After identifying the primary issues for the computer creative category I went through various stages of sketching then conducting interviews to determine where any of the concepts could fall short. 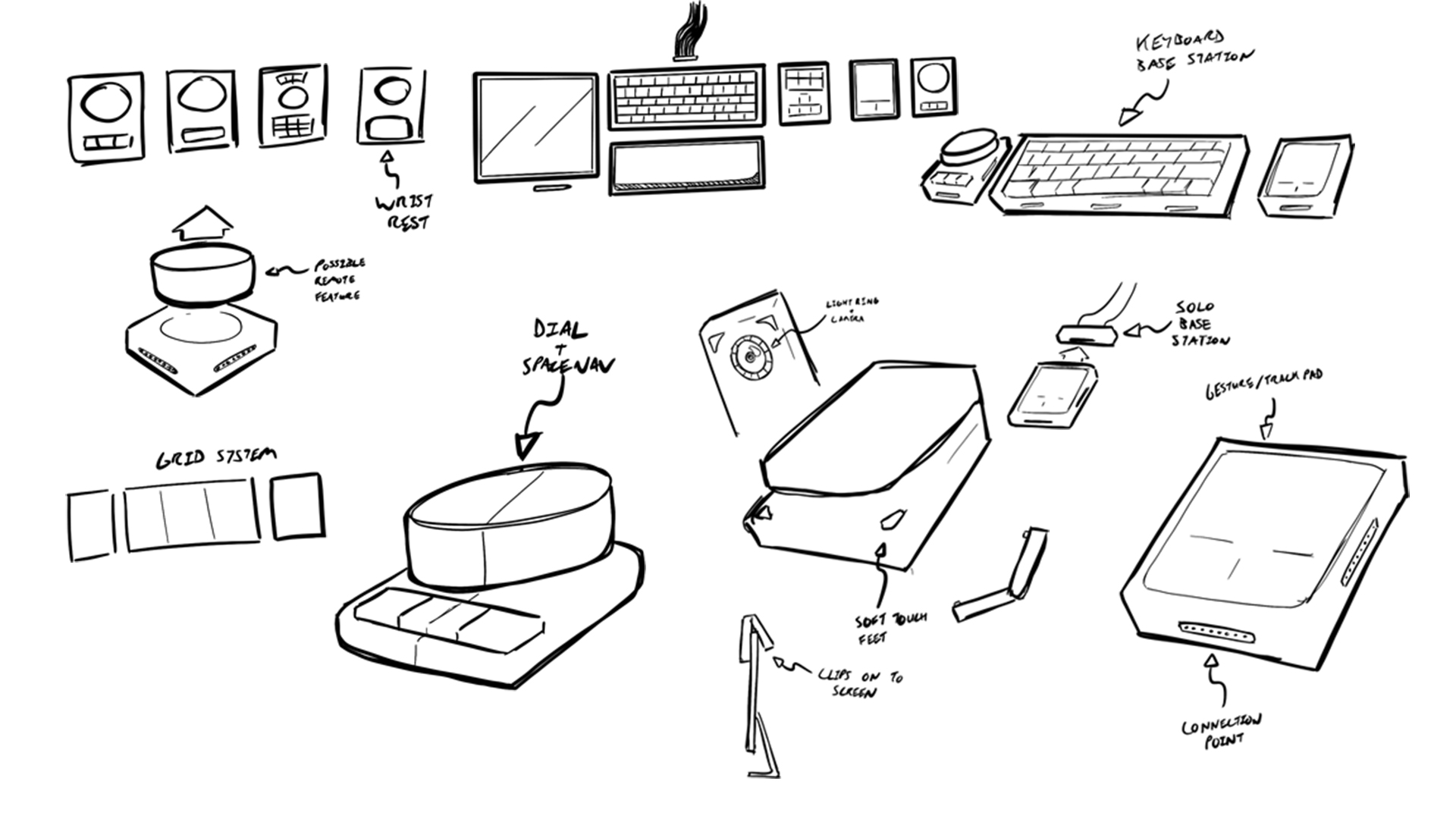 This early ideation phase more insight was gained from speaking with users. Users did not like the grid idea as it restricts where they can position the devices. 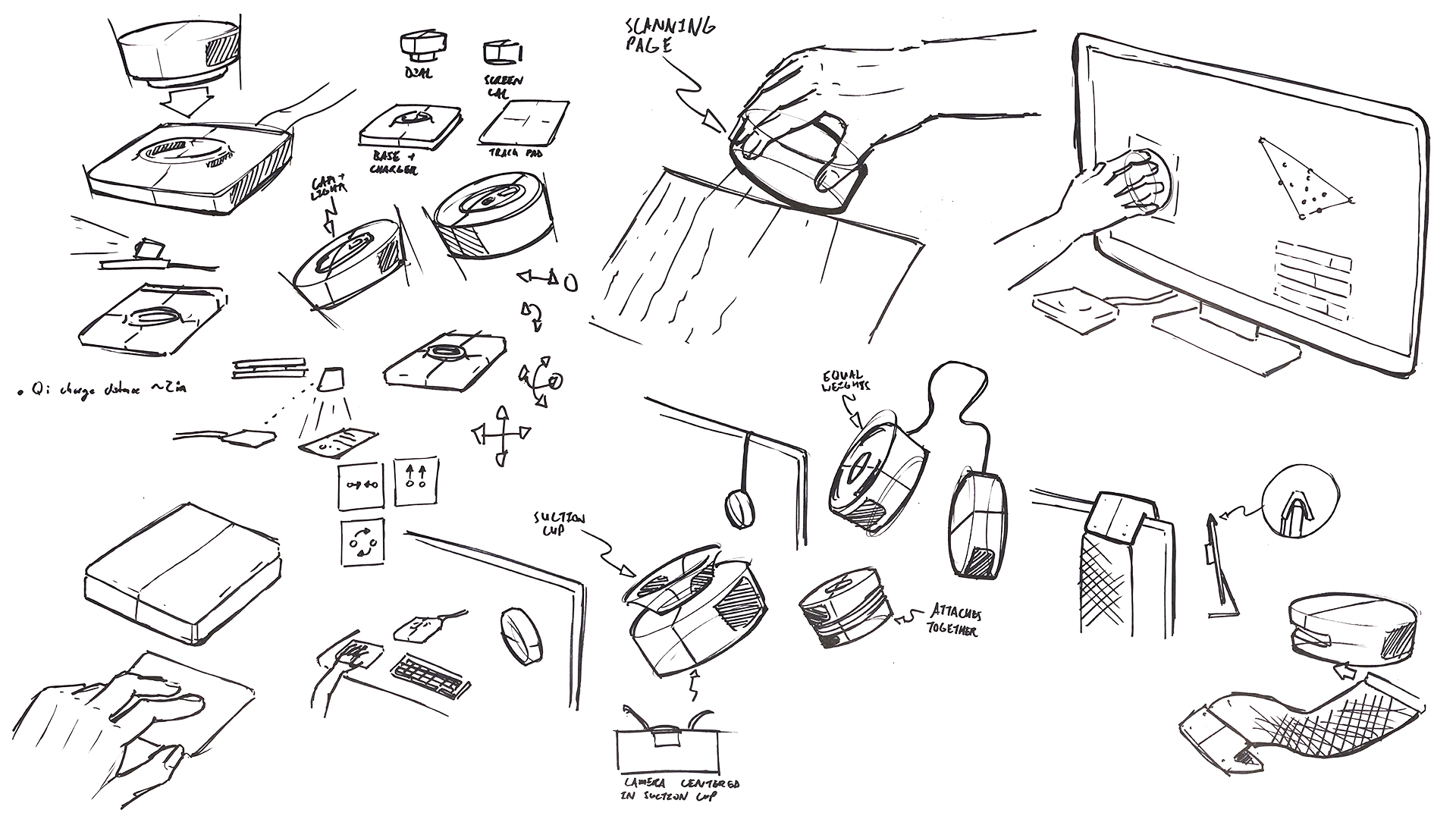 This ideation phase showed that users wanted the system to be a singular device rather than a system. 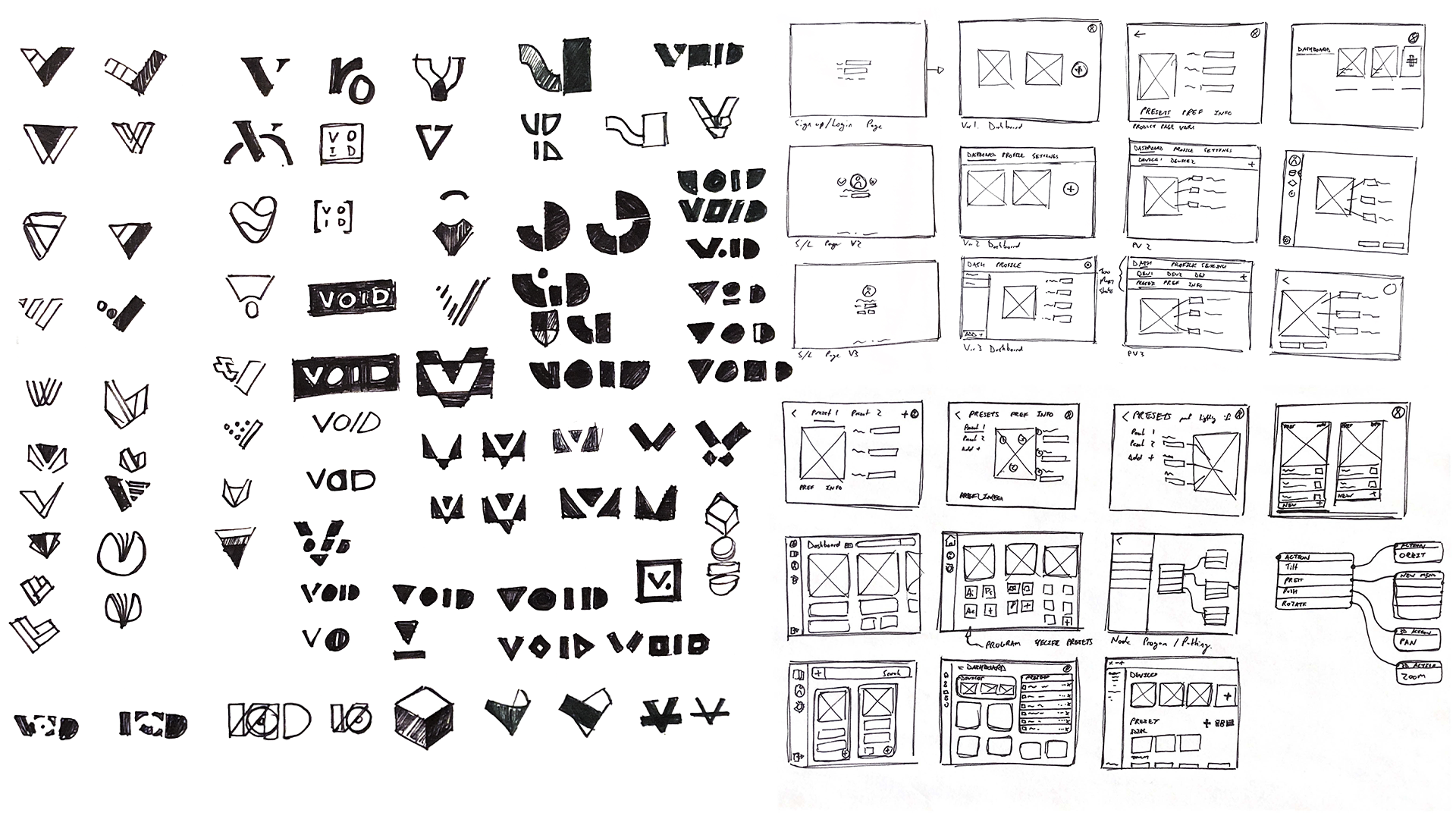 This ideation was done for the branding, and application. It was done after application audits and mood boards. 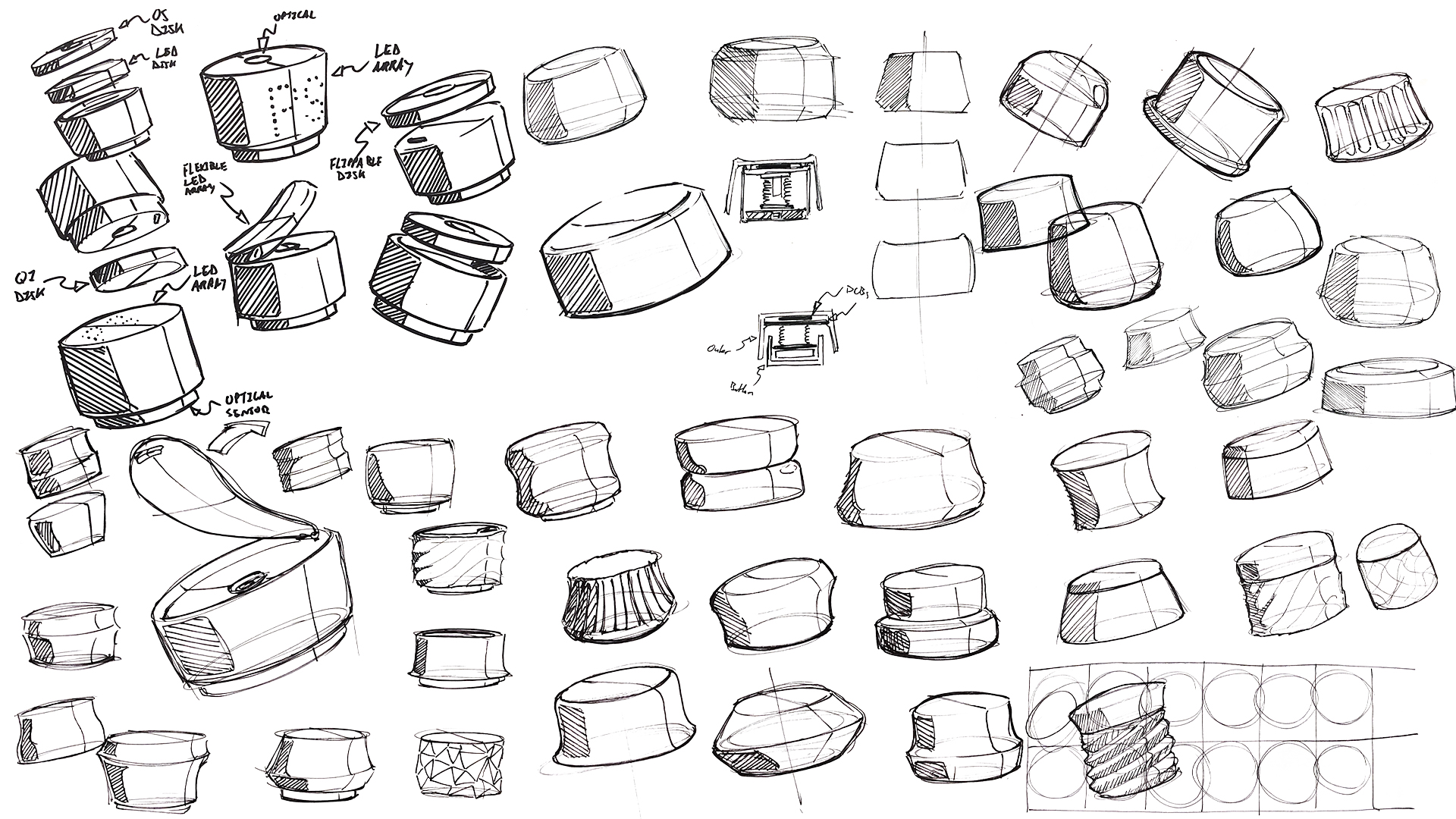 After this ideation phase I had designs I wanted to test to make sure they all could be held comfortably. Prior to the testing of different styles I tested different sizes as well to determine the most ergonomic size.

Various existing products were measured to information of the variety of dial sizing that exists within the same market. 4 test sizes were chosen with size 2 being most popular, but size 1 and 3 being close behind. The final size for the dial is ⌀6.5mm x 4mm was used to test multiple architectures for the product. The chosen architecture was 1 solid form with the components integrated inside (no disc), this architecture was used for the style tests. 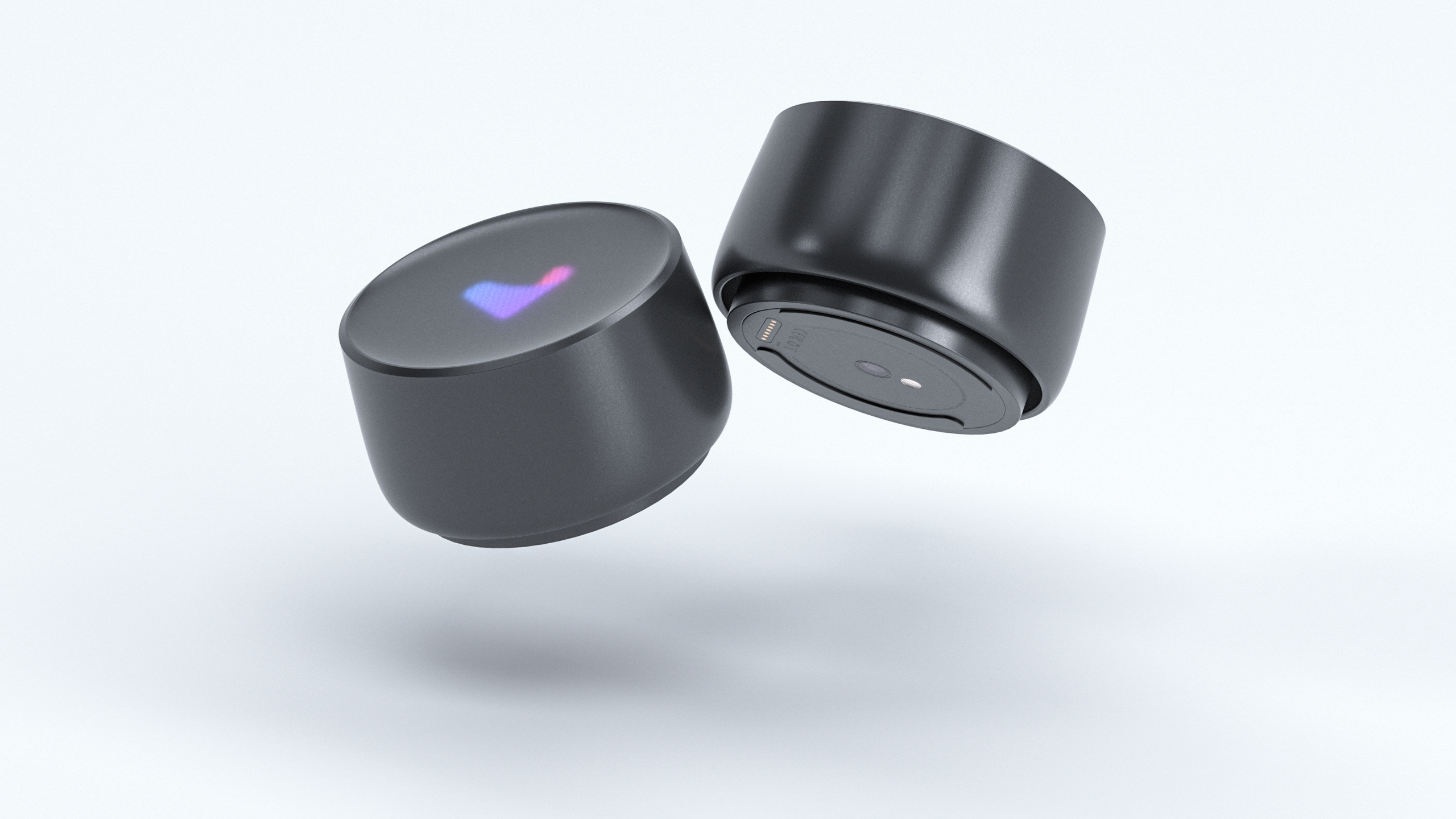 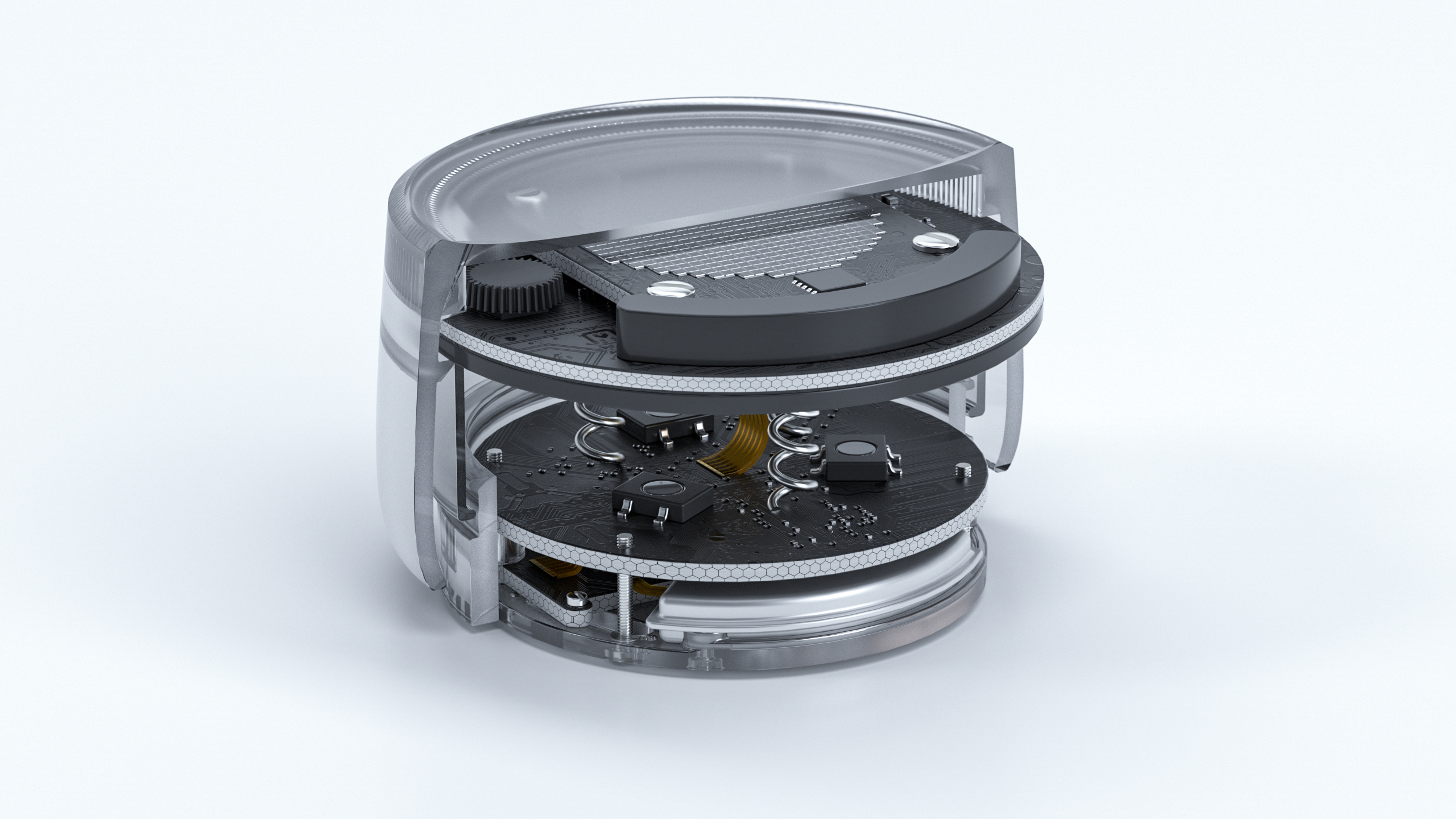 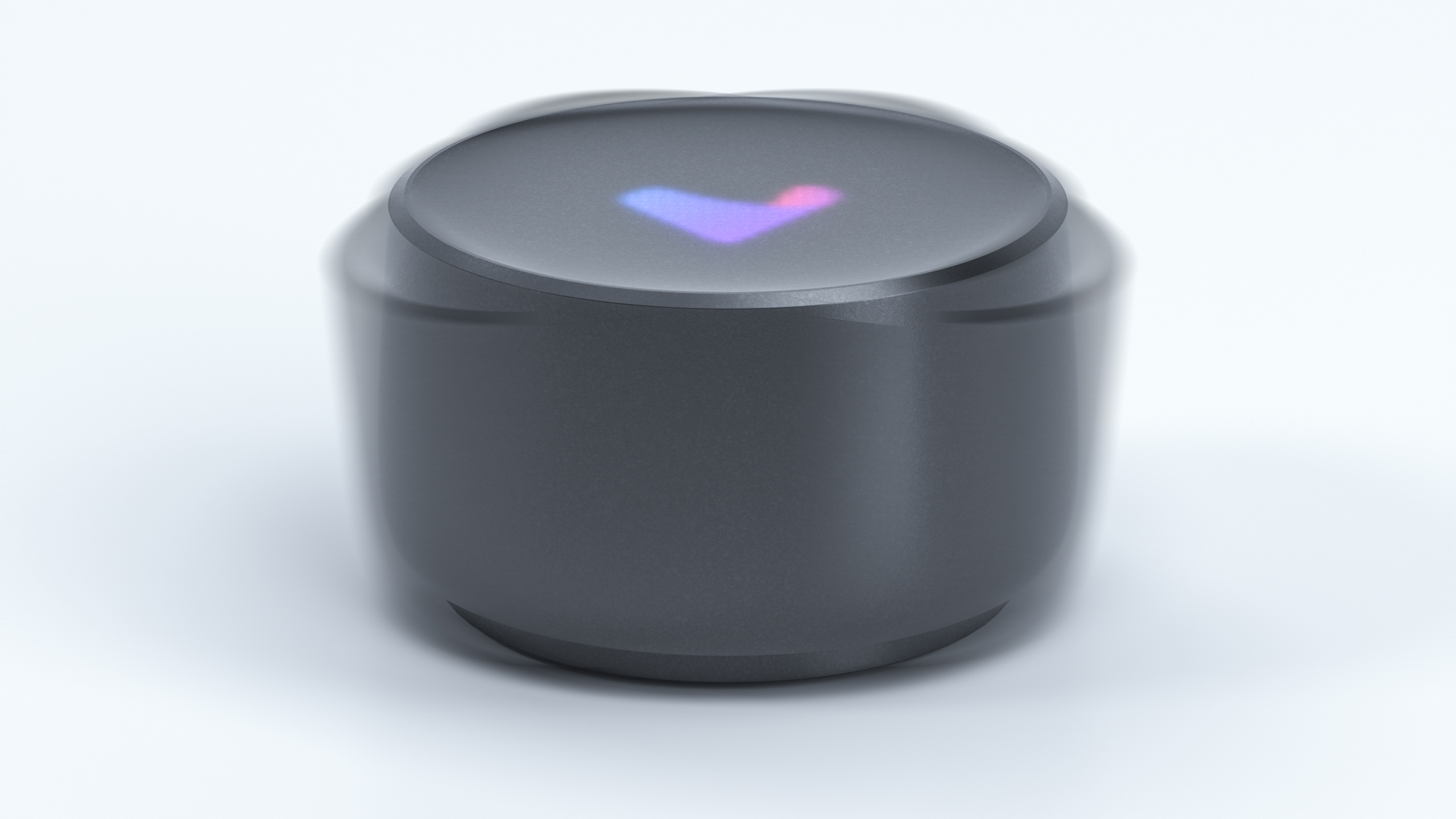 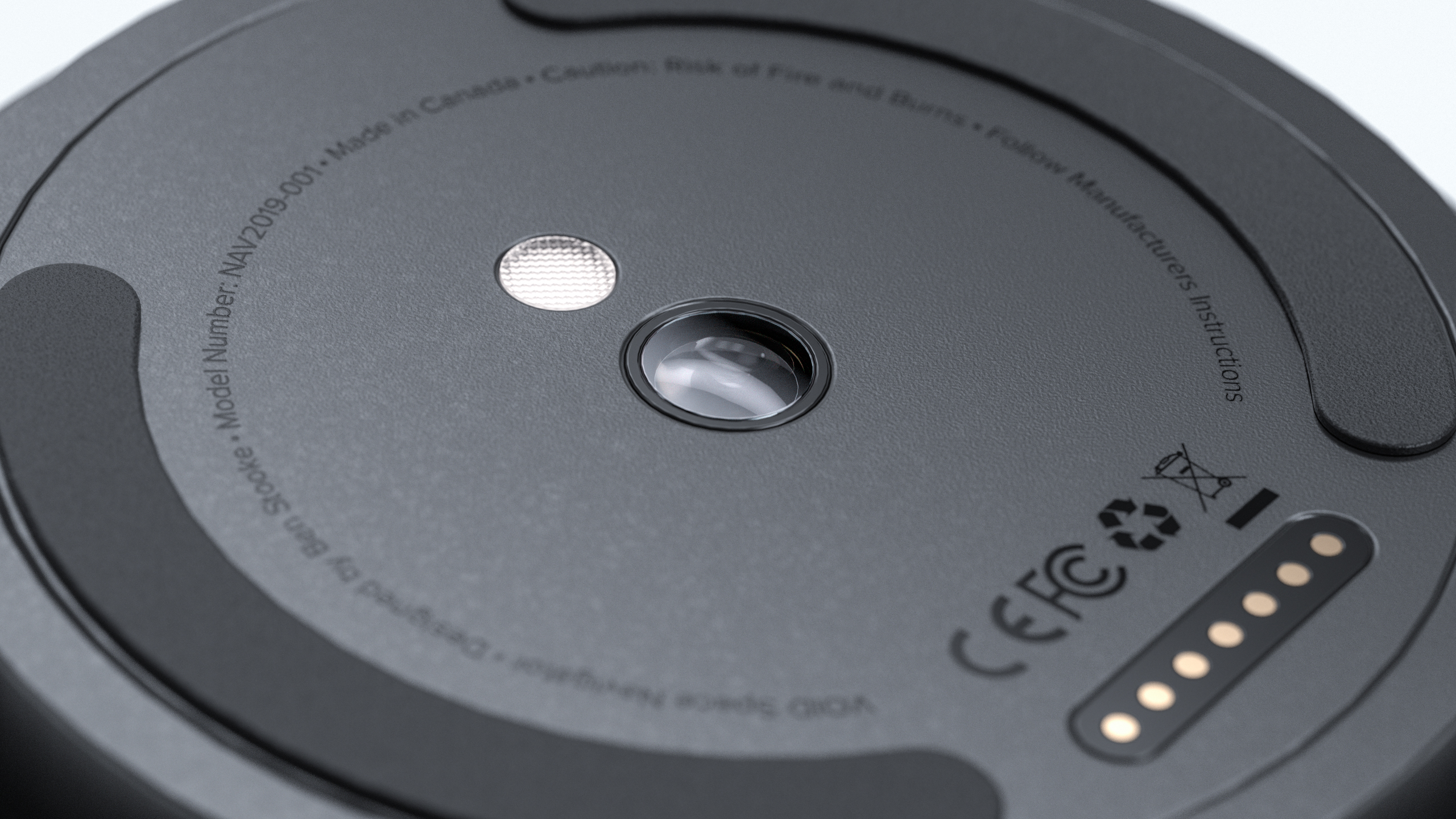 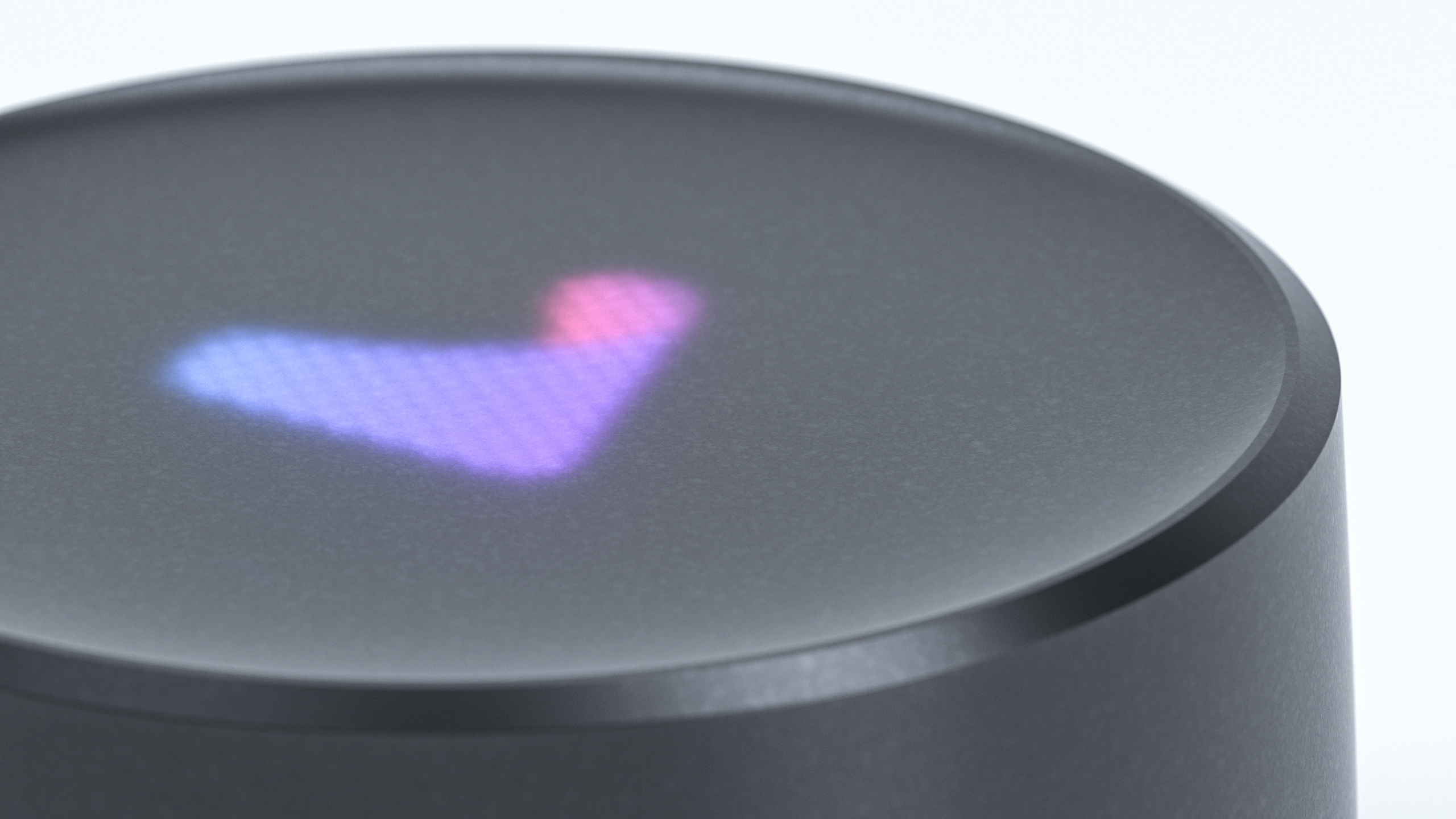 The final form for the product was Test Style 6 the Convex Sides. With the ergonomic form changes the other physical changes were: an LED Array was also implemented on top of the device, along a Unibody Upper Shell to prevent dirt and debree from entering while still allowing for full range movement, and a Colour Accurate Optical Sensor on the base of the device. The software changes were for better guidance, better visual communication, and a system that met the needs of the Power User and Basic User. These changes allow the user to reduce the number of devices needed, have more control over their device, and provides more functions than previous devices. 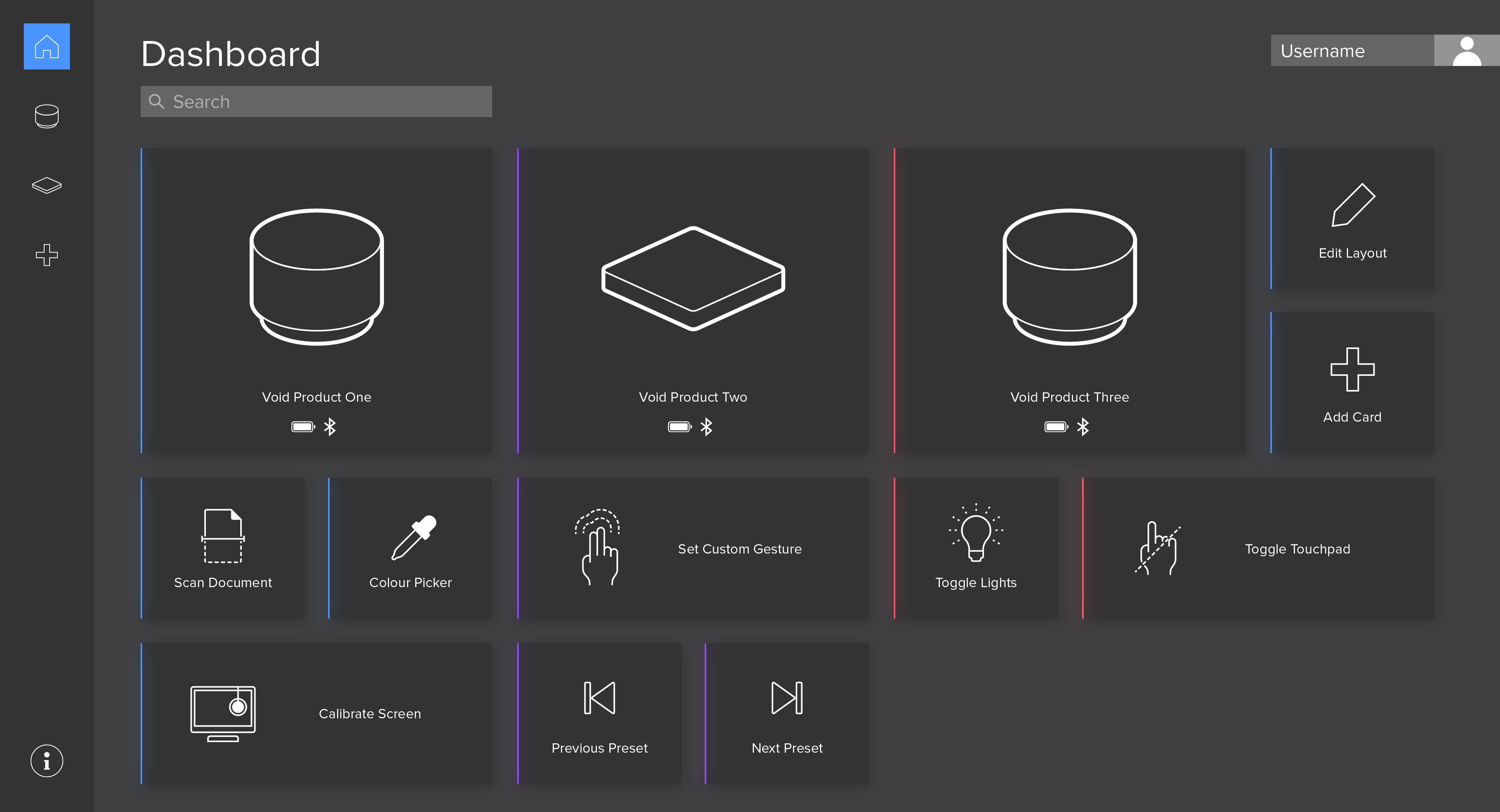 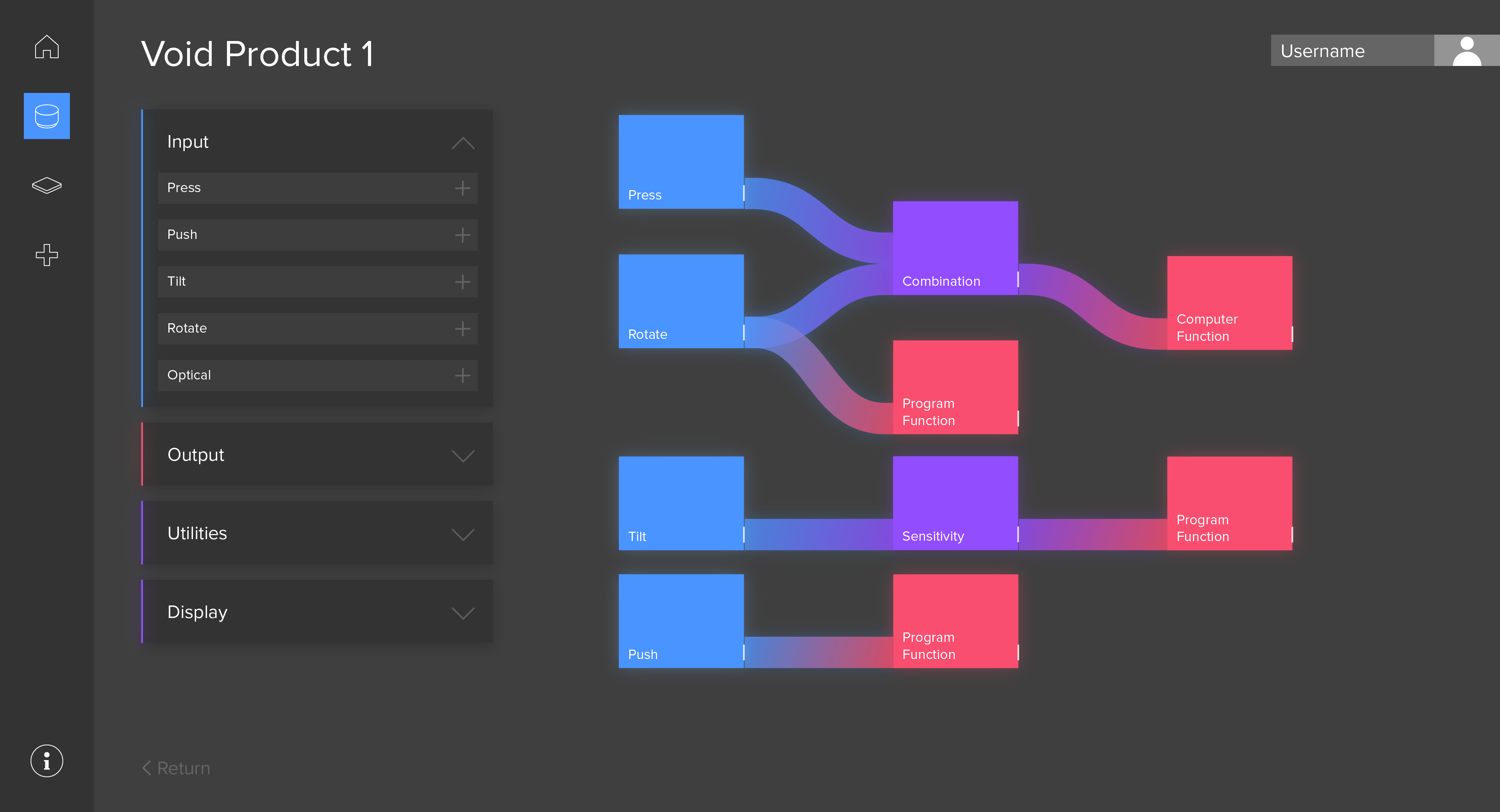